We have been interviewing and hiring a pile of engineering directors at Honeycomb lately. In so doing, I’ve had some fascinating conversations with engineering managers who have been trying unsuccessfully to make the leap to director.

Here is a roundup of some of the ideas and advice I shared with them, and the original twitter thread that spawned this post.

What is an engineering director?

Given all the title inflation and general inconsistency out there, it seems worth describing what I have in mind when I say or hear “Engineering Director.”

In a traditional org chart, an engineering manager usually manages about 5-8 engineers, an

In smaller companies, it’s common to have a “Head of Engineering” (this is an appropriately weaselly title that commands just the right amount of respect while leaving plenty of space to hire additional people below or above them). Or all of engineering might roll up to a director or VP or CTO. It varies a lot.

When it comes to the work a director is expected to do, though, there’s a fair bit of consistency: we expect managers to manage ICs, and directors to manage managers.  Directors sit between the line managers and the strategic leadership roles. (More on this later.)

So if you’re an engineering manager, and you want to try being a director, the first thing you’ll want to understand is this: it is generally better to get there by being promoted than by getting offered a director title at a different company.

How to level up

Lots of engineers get tapped by their management to become managers, but not many become directors without a conversation and some intentional growth first. This means that for many of you, trying to become a director may be the first time you have ever consciously solicited a role outside the interview process. This can bring up feelings of awkwardness, even shamefulness or inappropriateness. You’ll just have to push through those.

If you ever want a job in upper leadership, you are going to have to learn how to shamelessly state your career goals. We want people in senior leadership who want to be there and are honing their skills in anticipation of an opportunity. Not “oops, I accidentally a VP.”

It is better to get promoted than hired up a level

There are a few reasons for this. It’s usually easier to get promoted than to get hired straight into a job you’ve never held before (at a org with high standards), and it also tends to be more sustainable/more likely to succeed if you get promoted in as well. Being a director is NOT just being a super-duper manager, it’s a different role and function entirely.

A lot of your ability to be successful as a director (or any kind of manager) comes from knowing the landscape, the product and the people, and having good relationships internally.

When you are internally promoted, you already know the company and the people, so you get a leg up towards being successful. Whereas if you’ve just joined the company and are trying to learn the tech, the people, the relationships, and how the company works all at once, on top of trying to perform a new role for the first time.. well, that is a lot to take on at once.

There are exceptions, sure! Oodles of them[1]. But I would frankly look sideways at a place that wanted to hire me as a director if I haven’t been one, or hadn’t at least managed managers before. It’s at least a yellow flag. It tells me they are probably either a) very desperate or b) very sloppy with handing out titles.

If you want a promotion…

The obvious first step involves asking your manager, “what is the skill gap for me between the job I am doing right now and a director role?” Unlike in the movies, promotions don’t

usually get surprise-dropped on people’s heads; people are usually cultivated for them. Registering your interest makes it more likely they will consider you, or help you develop skills in that direction as time moves on.

If you have a good manager who believes in you, and the opportunities exist at your company, that might even be all you have to do.(!)

Take inventory of your opportunities

Lots of companies aren’t large enough to need directors, or growing fast enough to create new opportunities. This can actually be the most challenging part of the equation, because there are generally a lot more managers who want to be directors than there are available openings.

If you do need to find a new job to reach your career goals, I would target fast-growing companies with at least 100 engineers. If you’re evaluating prospective employers based on your chance of advancement, consider the following::

There are no sure bets. But you can do a lot to put yourself in the right place at the right time, signal your interest, and be prepared for the opportunity when it strikes.

a director is not a ‘super-senior manager’

A director is not just a manager on steroids: it is an entirely different job. It helps to have been a good manager before becoming a director, because many management skills will translate, but others will be entirely new to you. Expect this.

Let’s look at some of the ways that being a good engineering manager is different than being a good director.

Managers can get away with being opinionated and attached to technology, to some extent,

This difference of perspective is why managers will sometimes sniff about directors having sold out, or being “all about politics.”

(Blaming something on “politics” is usually a way of accidentally confessing that you don’t actually understand the constraints someone is operating under, IMO.)

A director’s job is running the business 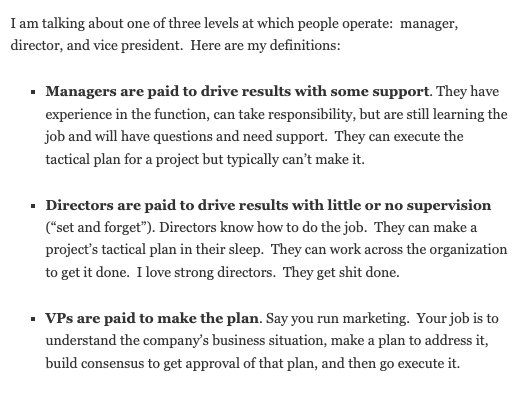 Directors run the business. They are accountable for results. You can’t be bopping in and writing or reviewing code, or tossing off technical opinions. That’s not your job anymore.

The distance between managing engineers and managing managers is nearly as vast as the gulf between being an engineer and being a manager.

But it’s sneakier, because you don’t feel out of your depth as much as you did when you became a manager. 😁

As a manager, each of us instinctively draws on our own unique blend of strength and charisma — whatever it is that makes people look up to you and willing to accept your influence. Most of us can’t explain how we do it, because we run on instinct.

But as a director, you have to figure it out. Because you need to be able to debug it when the magic breaks down. You need to help your managers influence and lead using *their* unique strengths. What works for you won’t work for them. You have to learn how to unpack different leadership styles and support them in the way they need.

If you’re working towards a director role:

There are lots of areas where you can improve your director skills and increase your chances of being viewed as director material without any help whatsoever from your manager.

You ✨can not✨ be a blocker

Directors run the business … so you CANNOT be seen as a blocker. People must come to you of their own accord to get shit done and break through the blockers.

If they are going to other people for advice on how to break through YOU, you are not a good candidate for director. Figure out how to fix this before you do anything else.

Demonstrate impact beyond your team(s)

Another way to make yourself an attractive prospect for director is to work on systemic problems, driving impact at the org or company level. You could:

I dunno — it all depends on what’s broken at your company. 🙃 Identify something causing widespread pain and frustration at the organizational level and fix it.

If there’s a problem, make sure you are the one to bring it to your manager (and swiftly), along with “Here is the context, here’s where I went wrong, and this is what I’m planning to do about it.” No surprises.

At this point in your career, you should have mastered the art of not being a giant pain in the ass to your manager. Nobody wants a high-maintenance director. Do you reliably make problems go away, or do they boomerang back five times worse after you “fix” them?

…Neither is managing ‘out’

Managing “out” is important too. (Not “managing out”, which means terminating people from the company, but managing “out” as in horizontally, meaning your relationship with your peers.)

What do your peers think of you? Do you invest in those relationships? Do they see you as an ally and a source of wise counsel, or a source of chaos, gossip and instability, or a competitor with turf to protect? If you’re the manager that other managers seek out for a peer check, you might be a good candidate for director.

psst.. People are watching you

One of the most uncomfortable things to internalize if you climb the ladder is how much people will make snap judgments about you based on the tiniest fragments of information about you, and how those judgments may forever color the way they think of you or interact with you.

overheard fragments of people talking about you…even the expressions on your face as they pass you in the hallway. People will extrapolate a lot from a very little, and changing their impression of you later is hard work.

(Yes it’s frustrating, but you can’t really get upset about it, because you and I do it too. It’s part of being human. )

Because of that, you really do have to guard against being too cranky, too tired, or out of spoons. People WILL take it personally. It WILL come back to hurt you.

Remember, you don’t hear most feedback. If you visibly disagree with someone, assume 10x as many silently agree with them. If one person gives you a piece of hard feedback, assume 10x as many will never tell you. Be grateful. The more power you are perceived to have, the less feedback you will ever hear.

You can infer a surprising amount about how good a director candidate may be at their job, simply by

listening closely to how they talk about their colleagues. Do they complain about being misunderstood or mistreated, do they minimize the difficulty or quality of others’ work, do they humblebrag, or do they take full responsibility for outcomes? And does their empathy fully extend to their peers in other departments, like sales and marketing?

Be approachable, be a drama dampener, project warmth. Control your calendar and carve out regular focus time. Guard your energy — never run your engine under 30%, and always leave something in the tank.

There are a lot more great responses and advice in the replies to my thread, btw. Go check them out if you’re interested.. and if you have something to say, contribute!.☺️

[1] Occasionally, it may work out to your benefit to jump into a new, higher title at a new company. This can happen when someone is already well qualified for the higher role, but is finding it difficult to get promoted (possibly due to insufficient opportunity or systemic biases). Just be aware that the job you were hired into is likely to be one where the titles are meaningless and/or the roles are chaotic. You may want to stay just long enough to get the title, then bounce to a healthier org.